What to expect from the NFT art boom 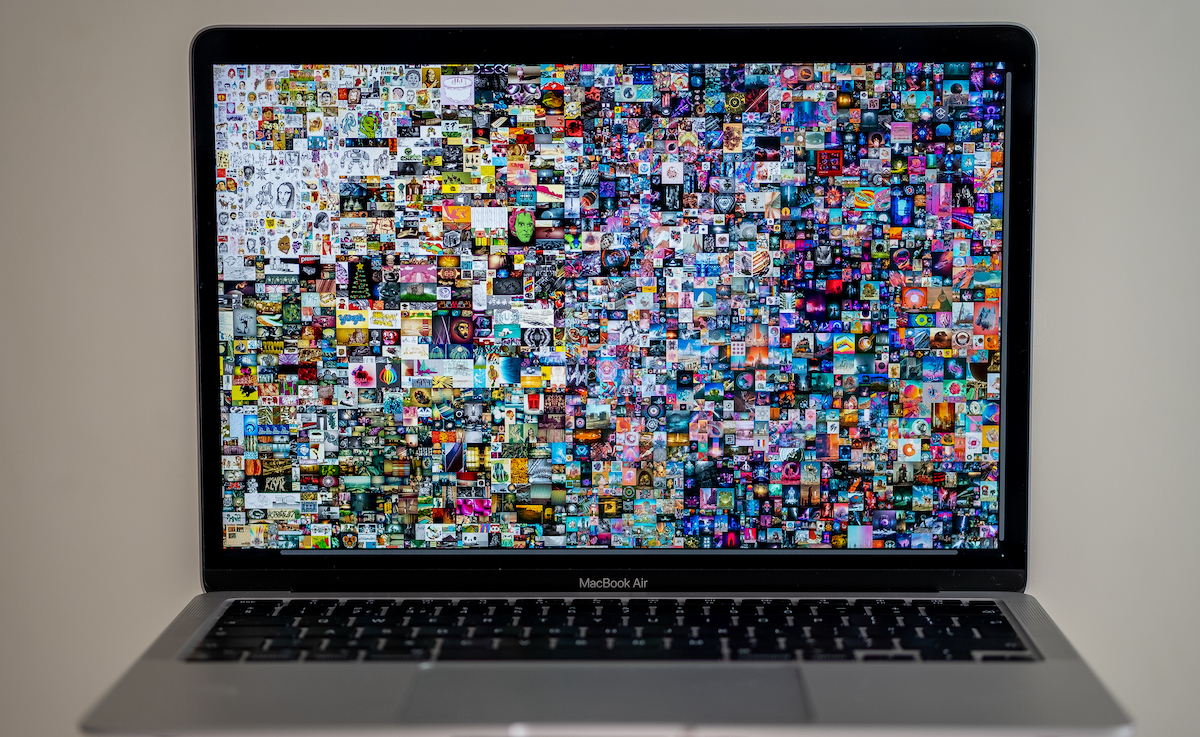 NFTs have taken the international world by storm raising many unanswered questions about the authorship, ownership and distribution channels of artworks, and about what is art in the first place. This post explores how this emerging, yet thriving, digital market works and considers its pros and cons.

As explained by Andrew R. Chow from Time Magazine, NFTs or non-fungible tokens, are digital tokens tied to assets that can be bought, sold, and traded. They can be thought of as computer files of any type (mainly JPEGs, GIFs, or MP4s) combined with proof of ownership and authenticity, like a deed. This proof of ownership and authenticity is displayed as a proprietary stamp.

On the opposite side than traditional art forms, NFTs are only linked together by the technology of the distributed ledger where they are traded, but they comprise all sorts of mediums and styles. They can exist on your laptop as digital representations of artworks, songs, films, games, and many other digital assets. All sorts of artists use these types of platforms but many artists and graphic designers working in groundbreaking and sometimes controversial styles are receiving unprecedented interest from NFT collectors.

Apparently NFTs are available to all, but artists wanting to join the NFT world need to first sign up to a marketplace and to “mint” digital tokens by uploading and validating their data on a blockchain. Now, an on-the-chain token normally does not store media since this is expensive, so it redirects to the file's address on an off-chain storage site. The file the artist had in the first place continues to exist but, as detailed by Brian Droitcour from Art in America, the NFT is a version that claims primacy because its identity is stabilized while the original remains impossible to identify as such. This means uniqueness is guaranteed, and rarity and scarcity are frequently attached and extremely valued in this sort of asset that lives and is traded in the digital realm.

Recently, the exorbitant prices that NFTs have reached have made headlines everywhere. But, when did NFTs start? Their origins can be traced back to 2017 or 2018 with the boom of CryptoKitties offering unique cartoon cat images which reached hundreds of thousands of dollars when being traded. From that time on, and especially during 2020, NFTs have gained massive traction and created an unprecedented market boom.

The market boom of NFTs

NFTs marked a revolution to the long undervalued digital art often posted on social media without any sort of compensation for the everyday artist. It also opened a new distribution channel for all sorts of digital art that has its own set of rules. For example, selling prices and sales are openly disclosed by artists without any shame, something that only auction houses do in the mainstream art market. At the same time, this market enables the artists to keep copyright and get a percentage of resale prices, typically around ten percent, something that yet again is not seen within the traditional art market channels.

NFTs are sold at marketplaces that work similarly to eBay. Most notably, Nifty Gateway, SuperRare, and Foundation are new online marketplaces where artists can sell their works. The price is set by the highest bidder, so no appraisals are necessary in this digital realm. However, as with any market, only a few names have made it big and many more obtain modest earnings, if any. Likewise, different interests are mingled in these transactions and some platforms or partnerships are by invite-only. All this means there is probably someone out there carefully orchestrating the top transactions and pushing some names.

Without any doubt, this market is now thriving. Time Magazine reported that collectors and speculators have spent more than $200 million on an array of NFT-based artwork, memes, and GIFs in February alone, according to market tracker NonFungible.com, compared with $250 million throughout all of 2020.

Amid all this frenzy, the top auction houses are looking for a way to access this seemingly distant world. Christie’s “Beeple sale” held in March made history when the JPG of the work “EVERYDAYS: THE FIRST 5000 DAYS” by American graphic designer Mike Winkelmann (known as Beeple) was sold for $69 million. The work comprising a digital mosaic of all the satirical illustrations the South Carolina-based artist has posted online each day since 2007, marked the third-highest sale by a living artist, following “Rabbit” by Jeff Koons and “Portrait of an Artist (Pool with Two Figures” by David Hockney. For the first time, Christie's accepted payment in Ethereum, the cryptocurrency most frequently used to trade digital collectibles.

Now, as Kyle Chayka from The New Yorker explained, before turning to NFTs Beeple had already a well-established reputation and had a following of almost 2 million on Instagram. While widely popular on the web, art critics are not exactly fans and question the real artistic value of his work. The artist once declared he did not think of himself as an artist, nonetheless, Christie's pared his sale with that of the top contemporary artists. This opens up questions about the boundaries of art and of who are the ones to say what is and what is not art.

On the other hand, Christie's openly shared that this market can bring new collectors' blood and may draw the young cryptocurrencies investors that usually collect NFTs to traditional art works later on. The latter was somewhat proven when Jason Sun, founder of cryptocurrency platform Tron and the underbidder for Beeple's $69 million work, recently acquired a Picasso and a Warhol at Christie's, reported Bloomberg. However, his intentions are far away from those of the everyday collector given he most likely intends to register these major works of art as NFTs through the Just NFT Fund.

Following Beeple's historic sale, Sotheby's recently launched a new partnership with NFT artist(s) Pak (April 12-14), reported Art News. Pak, whose real identity remains unknown, is an established figure within the NFTs world self-describing their (goes by “they” pronouns) job as omniscient designer/developer/wizard. Certainly, a sense of mystery is attached to these creator/s that have built a strong narrative around them and are going strong within the NFTs marketplaces.

These days even robots seem to be cashing on NFTs. The New York Times revealed an artwork created by Sophia the robot (possibly the first to be created in part by artificial intelligence) was sold at Nifty Getaway for nearly $700,000. The NFT “Sophia Instantiation,” is a 12-second video file, an MP4, that shows how a portrait of Sophia by a human partner, the Italian artist Andrea Bonaceto, evolved into a digital portrait by the robot itself.

Once again, more questions than answers stem from the NFT craziness. As this is fairly new, stereotypes are frequent and, on a first glimpse, NFTs can be seen as one block. However, one should remember they entail a channel of distribution, authentication, and trading and not a style or medium. Now let's look at some of the cons of NFTs.

The downside of NFTs

Even if NFTs are apparently open to all, it costs money and also requires tech skills to sell an NFT. Also, there is still much to be defined in terms of the copyright laws and how they will interact with this technology. Likewise, much needs to be determined about the fractionalization of ownership of this sort of work given some NFTs offer the possibility to buy shares. Such is the case of a project called B.20, created by the same crypto entrepreneur that bought Beeple's $69 million work, where people can buy shares of the artworks that live there, which means shared ownership of digital artwork.

NFTs are also part of a speculative boom and there are fears of this market crashing. For example, Robert Norton, Chief Executive, and Co-Founder of Verisart, a company that certifies artworks on the blockchain, stated to The New York Times: “We’re in a frenzy of speculation. I don’t know how long these prices will be sustainable.” Artists are also acknowledging this risk. Beeple recently said on Coindesk TV: “I think it’s a bubble,” adding, “If it’s not a bubble now, I do believe it probably will be a bubble at some point, because there’s just so many people rushing into this space.”

On the other hand, since they depend on a blockchain, the creation of NFTs is not at all eco-friendly. This technology requires an energy-intensive computer function where many servers need to continuously work. As proof of this, last December the London-based digital artist and computer scientist Memo Akten calculated that the minting and sale of the average NFT (created in platforms as SuperRare) produced about 211 kilograms of carbon dioxide, reported The New York Times.

Resulting from all this there has been a growing concern and pressure to reduce the excessive carbon print of NFTs. Some artists have decided altogether to avoid using this format. Such is the case of French digital artist, Joanie Lemercier who, as The Conversation reported, recently canceled the sale of six works after calculating the associated energy costs. The sale would use, in just ten seconds, enough electricity to power the artist’s entire studio for two years.

Some solutions for this problem are also coming from within the tech industry. Just a few weeks ago the new platform Palm was announced to be much more ecologically efficient than its competitors, mainly Ethereum. According to Art News, to kick off the platform, the venture has partnered with none other than controversial artist Damien Hirst to release The Currency Project comprising 10,000 oil paintings on paper, each of which is accompanied by its NFT. Also, Ethereum is now openly looking for a greener model.

While the real market value of NFTs and their potential sustainability to our already aching planet remain uncertain, formats similar to these are most likely here to stay and will probably evolve into new technologies that will sooner than later merge with the mainstream art market. Now, legitimization of this sort of art coming from the art top channels such as museums or curators is yet to be seen. Probably, new narratives will need to be written about this type of creative expression considering their diversity, languages, styles, and the tight communities NFTs artists have created over time.

Need help managing your art collection? Please sign up for a free trial at ArtCollection.io .