The Franks-Suss Collection: a collaborative approach to art collecting 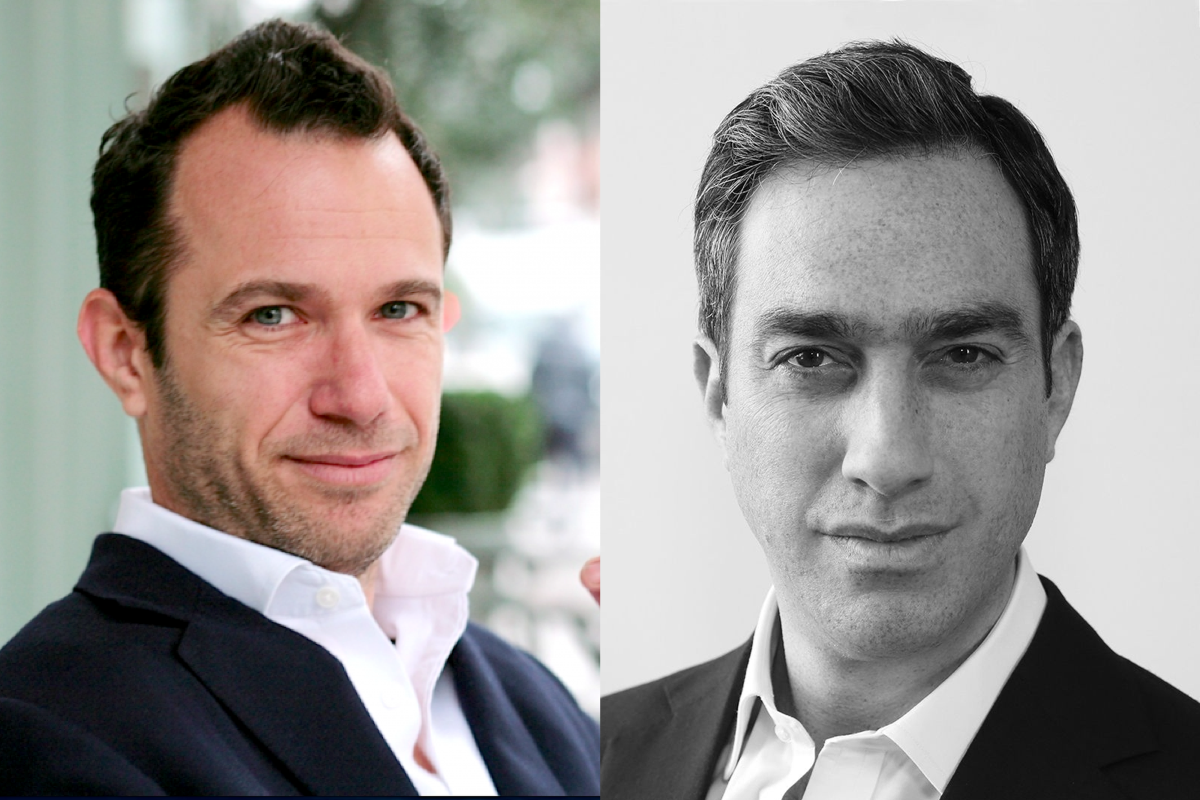 The Franks-Suss Collection was established in 2002 by British contemporary art collectors Simon Franks and Robert Suss as a means to discover and support emerging and mid-career artists. While initially focused on Chinese artists, nowadays this London, New York, and Hong Kong-based collection has an international focus and comprises almost 1000 contemporary artworks. This post explores how this collection came to life and analyzes the distinctive collecting practice of this power duo.

Who are the faces behind The Franks-Suss Collection?

To understand this collaborative initiative, we must first look at who are the key players behind it. Here we have an unconventional partnership between Franks and Suss, two non-blood related successful businessmen, savvy investors, and philanthropists who decided to join efforts to collect contemporary artworks from around the world. Next to Franks and Suss, since at least 2002, Tamar Arnon and Eli Zagury have acted as curators and art advisors for this collection.

Let's begin with Simon Franks who is acknowledged as the founder of the collection and a passionate filmmaker. As reported in a Financial Times profile, Simon comes from humble beginnings and by his 30s had earned enough money to never need to work again. He is the founder and non-executive Chairman of Redbus Group, one of the leading UK film distributors, and is co-founder of LoveFilm, a DVD rental company which sold to Amazon for £200m in 2011. Importantly, Franks is involved in many philanthropic pursuits, mainly the Franks Family Foundation created in 2006, which manages and funds many charitable endeavors around the world, particularly in South East Asia. Since 2010, Franks has worked full-time at his foundation.

Regarding his collecting practice, Franks first looked at Chinese contemporary art and then got involved in the international art scene. The first work he acquired was of artist Wang Qingsong, and then he bought works by artists such as Zeng Fanzhi and Jia Aili before they were internationally known. In an interview with Larry´s List, he shared some of his favorite artists such as Yonamine, Brad Kahlhamer, and Kudzanai Chiurai. Franks also said he feels confident in his practice when he notices many of the artists he supported in the early days gaining international recognition amongst reputed art collectors and dealers.

Now let's look at Robert Suss who is a dedicated and extremely successful investor, with expertise backed up by a 21-year career in finance. As Artsy detailed, he is also a keen supporter of culture and has been involved with the Royal Academy of the Arts for more than 20 years. There he serves as a trustee of the institution, and as a chair of both its patron committee and its schools’ yearly auction and dinner. Likewise, he is part of other philanthropic projects, such as Global Angels.

From an early age, Suss was a well-cultured museum-goer and started collecting art in his early 20s. The first work he bought was a Henry Moore and, in 2015, he quit his career in finance to make art collecting his main activity. “I'm an addict,” he once confessed to Amy Broomfield from Harrods Estates. Suss shares his collecting passion with his wife Simone, who owns the interior design firm Studio Suss specializing in working clients´ art collections into their interiors. The couple's private residence, featured in a Harrods Estates spread, is a testament to their approach to collecting art as it is full of their most beloved artworks. While Rob seems more private in terms of the media attention he has gotten as an art collector, he is out there on social media and has been listed by Art Map London among the top 10 art collectors to follow on Instagram (@robertsuss).

Next to Franks and Suss, Tamar Arnon and Eli Zagury, the first a specialist in art from Europe and the Americas and the second an expert in Chinese and Japanese art, have guided the acquisitions of the collection and established connections with art dealers, artists, and art schools on an international scale. Franks once shared with Larry´s List: “Both Tamar Arnon and Eli Zagury are complete visionaries with taste, integrity, and genuine passion that puts them ahead of the crowd. They are both very publicity-shy but this collection wouldn’t be anything without them.” As proof of this, many of the artists Zagury & Arnon purchased in the early days have gone on to have major international exposure. These include China’s Zeng Fanzhi, Li Songsong, and Jia Aili.

The Franks-Suss Collection: from China to the whole world

In the beginning, the focus of the collection was on Chinese contemporary art, as Franks shared in an interview with Larry's List, “…at the time there was no other country producing such wonderful works of art at such reasonable prices.” However, as time went by, the duo´s resources grew and they also wanted to look at other regions. For example, they have acquired many works by African artists and also look at emerging and mid-career artists from countries undergoing significant social, economic, or political change.

This international approach is evidenced in the fact that, according to their website, during the last year alone, Franks and Suss have bought artworks from artists based in over 20 different countries, and currently have outposts in London, Hong Kong, and Sydney. Geographically-wise, their contemporary art collection is now divided into China, Japan, The Americas, the Rest of Asia, Africa, the Middle East, and Europe

As to how they decide which works to add to their growing collection, for these collectors acquiring artworks is a personal yet well-informed journey. As Franks once said to Redbus Newsroom: “The more you see, the more you learn and the more your collecting takes on new directions and new meanings.” Franks and Suss try to acquire works that have at least one of the following three elements: genuine artistic skill and technical brilliance, an innovative and original concept, and a challenging or aesthetically pleasing look. “It is my strong belief that every piece in our collection has at least one, if not all, of these elements,” he added. However, even if the selection of works is frequently informed by these firm principles, over time different themes have developed within the collection. Some of these are directed by the collectors’ tastes, such as Franks’ passion for photography with the collection owning photographic works by artists like Wang Qingsong, reported Antonia Ward.

At the same time, both collectors prefer to meet the artists and to establish a personal connection with them before making any purchases. With this intention in mind, they have traveled extensively to make studio visits. For example, Franks declared to Larry´s List that, next to his wife, he has been to Cambodia, China, Brazil, Hong Kong, or off the beaten trail in places like the US or Europe. As further proof of this approach to collecting, Suss considers that they know at least half of the artists that are part of their collection and they frequently follow their careers for a long time. Such is the case of Jonas Wood, whose career they have been following for more than 10 years. Next to their interest in meeting the artists, both collectors frequently look for new talent at London’s leading art schools usually attending first exhibitions or graduate shows.

The duo´s collecting method aligns with their mission to support artists´ careers. For Franks and Suss collecting is more than artworks as objects, it is about the artists as creative individuals. With this intention in mind they try to promote their artists by holding shows in galleries, public spaces, and museums, connecting them with gallerists, introducing them to collectors, commissioning works, or providing a piece of useful advice.

Regarding their activities, this collection rarely organizes exhibitions, and it does not have a permanent exhibition venue. I only found records for two shows curated by the curatorial in-house team. The first one was staged in 2009 at Franks’ private residence in Hampstead, and the second one was organized in 2010 at Phillips de Pury & Company’s space at the Saatchi Gallery. The latter presented 25 works from the collection featuring 20 artists including Farhad Moshiri from Iran, Os Gemeos from Brazil, Sun Xun from China, Matthew Day Jackson from the USA, and Boo Ritson from the UK. The exhibition also included works by Fernando Gutierrez, Michael Vasquez, Jia Aili, Ryan McGinley, Mariana Mauricio, Chen Ke, Kentaro Kobuke, Steve Bishop, Kohei Nawa, Tomoo Gokita, Jon Pylypchuk, Li Jikai, Izumi Kato, Radhika Khimji, and Kevin Francis Gray.

The collectors take on art collecting

Franks and Suss have a strong stance about their collecting practice. Particularly, they have openly spoken against what they call “the commoditization of art” or collecting art solely for financial gain. Franks once declared in an interview: “It makes me very sad every time I hear someone in the finance industry describing art as an asset class. It bothers me that some very rich collectors don’t give a damn about artists or the importance of art in a healthy society but just want to buy brands they can put on their wall and to which even a modestly educated person would be able to identify as a) who the artist is and b) that it cost a fortune.” Franks added that, while he considers art fairs are still a place where one can spot new talent and has been to most of them, he also thinks they sometimes are more valued as social destinations. Suss shares this view and once stated to Harrods Estates that he buys what he loves whether it's in vogue or not.

While this position towards collecting is refreshing and cherishes the artworks and the artists as talented individuals, the reality is that these two collectors, or anyone for that matter, cannot completely escape the dark side of the art market. However, as with all things in life, acknowledging a problem is always the first step to finding a solution. So these two seem on the right track.

Hopefully, we will soon be able to experience more of the works from this collection in new exhibitions or exciting partnerships. In the meantime, we can all have a glimpse of its holdings through the collection´s website that includes a bio and a link to the website or gallery of each artist, something that relates to the collection´s mission to promote their artists. As of what the future holds for this collaborative venture, Franks and Suss wish to continue to grow their art collection and for it to be recognized globally as an initiative that helps to set the agenda for emerging art, and that publicizes and supports the artists they love.