The story of art collecting: from Rome to the rise of museums 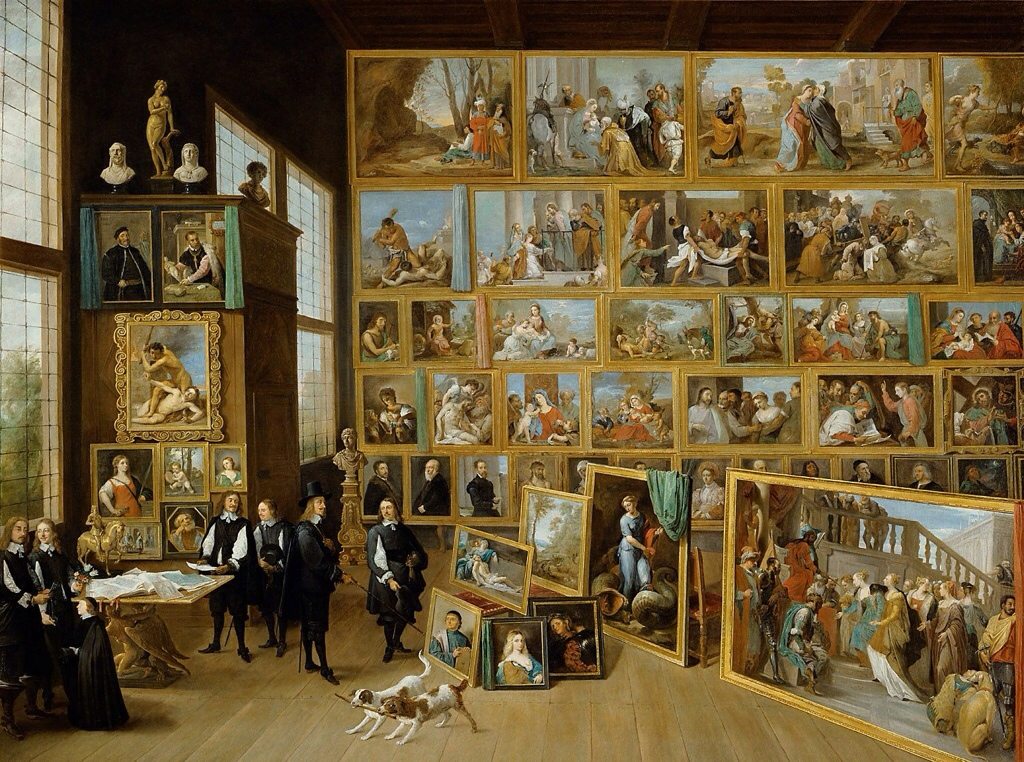 The story of art collecting can be traced back to ancient civilizations and has unfolded in a continuous, evolving fashion ever since. Importantly, this story is intrinsically linked to the rise of the world´s most popular and admired art museums of the 19th century. Besides, during the 20th and 21st centuries, this practice has kept on flourishing as it navigates between the private and public realms.

What is collecting and what drives this practice?

Before beginning this “story,” it’s relevant to frame the conversation around the general practice of collecting. While in the past, scholars have attempted to define what collecting means, the most recent consensus is that the practice eludes an univocal definition. Nonetheless, some authors, like Susan Pearce, have analyzed its main features. Pearce affirms that the act of collecting comprises: 1) a non-utilitarian gathering of objects, 2) an intrinsic relationship between the things gathered, and 3) a subjective view of the owner. To the latter, Russell W. Belk adds that collected items tend to acquire a “sacred” status. Sacred meaning extraordinary, special, or capable of generating reverence. This is certainly applicable to art objects.

On the other hand, we can also look at the main motivations behind collecting art. This task isn’t an easy one since there are multilayered and overlapping motivations that have evolved over time. Nonetheless, we can name the quest for identity (individual or of a certain group), an appreciation of an artwork´s aesthetic or cultural values, a sense of purpose, a need for legitimization, an obsession, and more recently, an investment. Keeping these attributes and motivations in mind, we can now move on to narrate the way in which art collecting has unfolded.

The origins of art collecting

The origins of collecting can be traced back to the ancient civilizations of Egypt, Babylonia, China, and India where they accumulated objects in temples, tombs, and sanctuaries. Frequently those objects were used to display the glory of a ruler and/or religion. In the West, the intention of collecting art by itself was more clearly developed in the Hellenistic period (4th–1st century BC). During that time a growing number of avid collectors commissioned works of art and copies of earlier Greek works. At the same time, consumers were decorating their homes and gardens with luxury items, such as fine bronze statues, stone sculptures, and pottery works. It was only with the rise of the Roman Empire, that art collecting came into its own with the creation of the art market. According to the Metropolitan Museum of Art, this was especially evident during the reigns of emperors Augustus (r. 27 B.C.–14 A.D.) and Hadrian (r. 117–138 A.D.).

Art collecting: from the Renaissance to the 17th century

Moving ahead, the Italian Renaissance is perceived as the origin of the modern-day museum, and of the theorization of art collecting. During this period of time the act of commissioning artworks or of having a great collection had a direct connection to the patron´s social status, erudition, and taste. Besides, during this time the artists obtained a higher status given they were respected and considered as gifted.

Among the most important collectors of this time were the Medicis of Florence, the Gonzagas of Mantua, the Montefeltros of Urbino, and the Estes in Ferrara, who all formed rich art collections of antique sculptures, commissioned artworks, and elaborate decorations. Both aspects of their collections were fulfilled by diverse channels. In the first case, the quest for antique sculptures was satisfied by amateur archeologists searching for objects that would bring a new immediacy to the ancient cultures. Besides, an industry of restoration and reproduction developed in the artistic centers of Italy. Fragments of ancient objects were “restored” with modern additions leading to new works and added meanings. Regarding the commission of artworks, some collectors commissioned works linked to antique models—but that conveyed messages for the present.

The 16th century saw the systematic collecting of objects that were usually arranged in the Kunst- und Wunderkammer (term firstly used in 1564-66) displaying an encyclopedic collection on a universal scale (Picture 1). The three elements of these spaces were naturalia (products of nature), arteficialia (products of man), and scientifica (mainly scientific instruments). In Italy, the space that housed these objects were referred to either as stanzino, studiolo, museo or galleria. The latter applied to collections of paintings and works of art that could contain curiosities as well, such as the renowned Medici galleria. As Wolfram Koeppe from the MET states, “The Kunstkammer was undoubtedly a typical product of its time, a manifestation of the thirst for humanist learning.”

The princely Italian collectors described above were followed by stately and royalty figures of the 17th century, who largely grew up in Europe and witnessed the rise of easel paintings relative to other types of art objects. Among some of the main collecting figures were Jean-Baptiste Colbert (finance minister under King Louis XIV), and Cardinals Richelieu and Mazarin of France; Archduke Leopold William and Kings Philip III and IV of Spain; the Duke of Buckingham, the Earl of Arundel, and Charles I of England; and Queen Christina of Sweden.

Art collecting and the rise of museums

Gallery of the Louvre, 1831-33, Samuel Morse courtesy of Wikimedia

During the 18th century Europe’s royalty began to open their doors to the public for the viewing of their immense collections, and as time went by monarchs and aristocrats also began donating their collections. The first notable example is the case of Maria Ludovica, the grand duchess of Tuscany and last of the Medicis, who in 1737 gifted her family’s collection to the state of Tuscany (now resting at the Uffizi Gallery, Pitti Palace, and Laurentian Library, in Florence).

The impulse to donate was replicated by many art collectors resulting in the opening of Europe’s great Museums during the late 18th and early 19th centuries. Museums were conceived as secular spaces for public engagement and learning. The institutionalization of art collecting was linked to the Enlightenment ideals fused with the quest for nationalism and colonial expansion. We see the emergence of Museums devoted only to art like the Capitoline (Rome, 1734), the Louvre (Paris, 1793), the National Gallery (London, 1824), and the Alte Pinakothek (Munich, 1836). The latter brings forth the story of how art collecting is closely linked to the rise of the most important art museums in the world that are still very much alive today.

During the 19th century, there was a flourishing of private art collecting in the United States with many collectors seeking artworks from European origins. These artworks were made accessible by the opening of spaces and exhibitions devoted to this type of art, as the Metropolitan Fair Picture Gallery on 14th street, opened in 1851; and by the frequent traveling of art collectors to Europe. During the second half of the 19th century, there was an unprecedented move from titans of industry to accumulate impressive fortunes and thus art collections. Besides, both wealthy private collectors and politicians frequently sought to have their portraits painted. Among these characters we can mention, J.P. Morgan, Henry Clay Frick, William Vanderbilt, Andrew Carnegie, and Andrew Mellon.

In the same fashion as in Europe, many art collectors bequeathed their art collections to museums. In this sense, the creation of the great museums during the 1870s, like the Corcoran Gallery of Art in Washington in 1869, the Metropolitan Museum of Art in New York in 1872 (founded with three private European art collections), and the Walters Art Gallery in Baltimore the following year.

Without a doubt, the movement of artworks from private collections into museums has been a dominant feature of art collecting since its origins. However, as time has gone by, the practice of art collecting has acquired various layers, motivations, and distribution channels as it involves multiple elements linked to the art market that bear social, cultural, and sometimes political ramifications. To learn more about the recent history of art collecting, please read our second article The contemporary story of art collecting: the 20th and 21st centuries.