The History of Auction Houses: Sotheby's 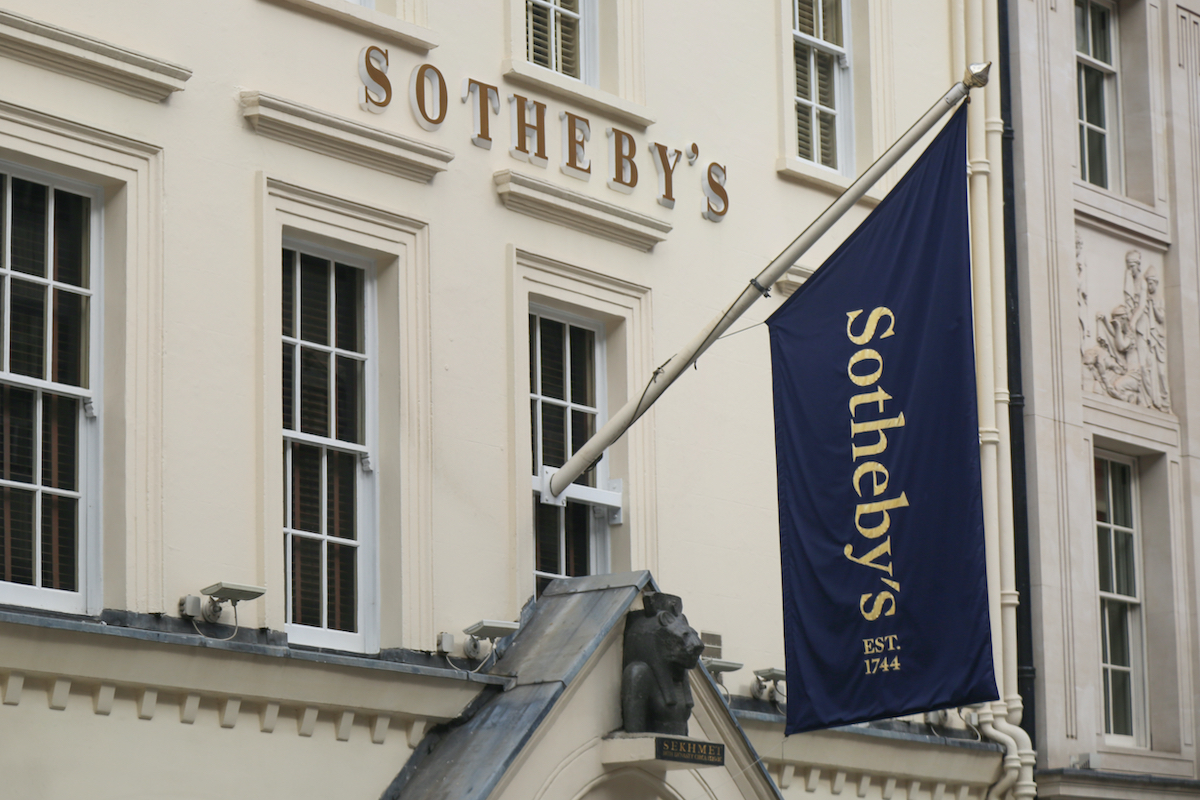 Auction houses are one of the main driving forces of the global art market. What was once perceived as a desperate measure of someone selling for death, debt or divorce has now become a high-end spectacle generating billions of dollars each year. However, in the midst of a global health crisis, auction houses are being forced to evolve once again by diving into the digital realm.

How have auction houses become the powerhouses that they are today? And how have names like Sotheby's, Christie's, Phillips, and Bonhams become leaders in the global art market? This series intends to explore these questions with each post focusing on a particular auction house. To kick things off, we've decided to start our series with Sotheby's, one of the oldest auction houses, with a centuries-long tradition that recently made headlines due to its corporate restructuring and its live-streamed auction held on June 29th. In this post, we begin by outlining the general context of auctioneering and then focusing on the events that have made Sotheby's the global powerhouse that it is today.

What is the history of auctions?

Auction comes from the Latin word, auctum, meaning "I increase". The definition speaks to the act of increasing one's bid to become the highest accepted offer for a good or service. While modern-day auctioneering can be traced back to the 18th century, ancient civilizations, such as the Greeks or the Romans, held auctions mainly of women, slaves, and the assets of debtors. After this initial period, auctioneering took a downfall and then rekindled in the 17th century with candle auctions, an auction in which the duration was determined by the amount of time it took a candle to burn out. Ever since auctioneering has evolved into an essential component of the selling of various goods and services.

The first established auction house was the Stockholm Auction House, founded in Sweden in 1674 by Baron Claes Rålamb. In the case of Britain, Sotheby's was the first auction house established in 1744. As Shireen Huda recalls in her book Pedigree and Panache: A History of the Art Auction in Australia, 18th century London saw the creation of auction houses connected to the arts and whose stories have been intertwined and not free of rivalry ever since. Such is the case of the aforementioned Sotheby's, Christie's (1766), Phillips, and Bonhams, with the first three accounting for 70% of the contemporary art market, according to The 2018 Contemporary Art Market Report.

How did Sotheby's turn into an art auctioning powerhouse?

Sotheby's was founded in London on March 11, 1744, when Samuel Baker was tasked with selling books and manuscripts from the library of Sir John Stanley, 1st Baron Stanley of Alderley. In its initial years, Samuel Baker and his business partner George Leigh were focused on auctioning library collections, such as those of Napoleon, John Wilkes, Benjamin Heywood Bright and the Dukes of Devonshire and of Buckingham thusly garnering a reputation of handling some of the most important libraries of the 18th century. As an authority in rare books and manuscripts, Samuel and George were regularly consulted for their expertise on matters, which according to Robert Lacey, in his book Sotheby's: Bidding for class, has been a distinctive feature of the auction house ever since. Importantly, the name Sotheby´s didn’t emerge until Samuel Baker passed away in 1778, leaving his business to George Leigh and his nephew, John Sotheby. Over the course of its history, the auction house’s name has incorporated various partners such as John Wilkinson and Edward Grose Hodge.

As much as Sotheby's rare-book and manuscript business is enticing to read, we’ve decided to focus our efforts on the events that turned Sotheby’s into the art world leader it is today. In this sense, the presence of rich art collectors in London, from 1880 until the market crash of 1929, was a period of prosperity for British auction houses selling art. Accordingly, during this period Sotheby's made its decisive immersion into the art world.

During the war years and the full course of its history, aside from being an art selling business, Sotheby's established a reputation for scholarly expertise and art research. As proof of this, Caroline Davies from the Guardian recalls writer Cyril Connolly (1903-1974) once referring to Sotheby's as a museum: “…an emporium where nobody expects you to buy, a museum where all the objects are changed once a week … a university which issues three or four textbooks weekly.” Adapting to the changing times, during the Second World War, the auction house painting basement also functioned as a public air-raid shelter.

A relevant figure behind Sotheby's connection to art, its international reach, and mediatic presence was Peter Wilson who, from 1958 to 1980, acted as the chairman of Sotheby's. In an article for the New Yorker, Peter Wilson once stated “A picture is more interesting if someone has paid a lot of money for it, don’t you think?" (1966). According to Shireen Huda, the success of Sotheby’s is also directly linked to the shift of art collectors from discreet art dealers to public auction houses following the end of the Second World War. Nonetheless, art dealers still thrived as the market became more diversified with collectors.

As the years went by, Sotheby's created several innovations that had ripple effects on the art market. For example, during the time of Peter Wilson, Sotheby’s opened a New York venue, in 1954, and it held impressionist and modern art auctions from 1955 onwards. The auction house was also one of the first to invest in advertising. From this period dates the emblematic Goldschmidt sale, held in 1958, which made history for art sales given it infused a celebrity and posh component to auction sales. In 21 minutes, seven paintings, including works by Manet, Cézanne, and Van Gogh were successfully sold. Adding to its New York venue, the auction house also acquired an international presence by expanding into Melbourne (1968), Hong Kong (1973), Russia (1988), India (1992) and France (2001), as well as being the first auction house to have a presence in mainland China (2012). 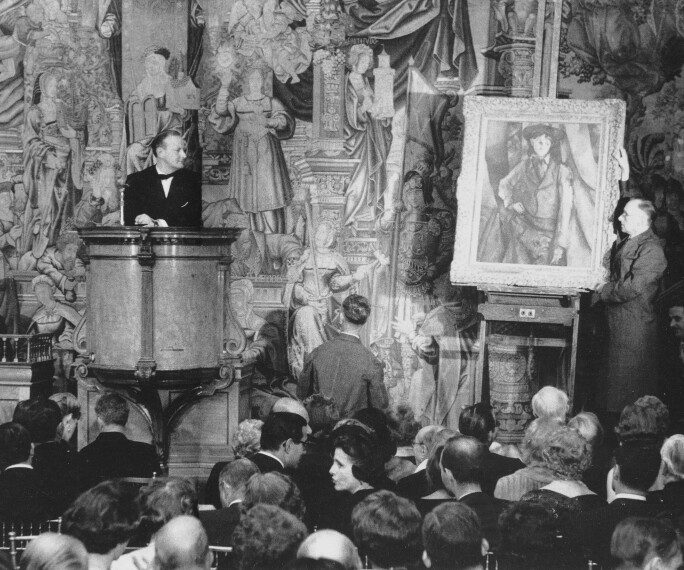 Following the time of Wilson, the auction house was acquired by A. Alfred Taubman (later immersed in a commission-fixing scandal involving Christie´s). This marked the establishment of Sotheby's headquarters in New York. During these years, Sotheby's went from public to private on different occasions. As the 1990s and early 2000s arrived, Sotheby´s continued to make headlines for record auction sales such as Picasso’s Garçon à la pipe, for $104.2 million (2004), and Warhol’s Silver Car Crash (Double Disaster) for $108.4 million (2013). One of the most important events being the sale of Edvard Munch’s, The Scream (2012), for $120 million which, as The New York Times reported, marked the highest selling work of art ever sold at auction. Besides, in 2016, Sotheby's hired a prominent art fraud expert to start a Scientific Research Department, the first of its kind among auction houses.

As an emblematic moment of art history, 2008 saw Damien Hirst´s auction, Beautiful Inside My Head Forever, a collection of more than 200 works directly from the artist accompanied by a global marketing tour. The auction exceeded all expectations and grossed $200.75 million, according to Nate Freeman. This event was extremely important given it represented the supremacy of the contemporary art market amidst a dramatic financial crisis. Hirst affirmed: “I think the art world is definitely already going in this direction, and my auction is just a fast-forward.”

In 2019, Sotheby's celebrated its 275th anniversary by ringing the bell of the New York stock exchange. During that year Sotheby's reaffirmed its leading place in terms of yearly auction turnover reaching $623,121,600, The Contemporary Art Market Report affirmed.

In 2019, Sotheby’s was also acquired by Patrick Drahi, the multimedia billionaire responsible for the telecom giant Altice. As Eileen Kinsella and Tim Schneider from artnet reported, the acquisition valued the auction house at $3.7 billion, which in turn made the auction house private after being on the New York Stock Exchange for the last 31 years. The deal also involved acquiring $467 million of debt. Due to its nature, the acquisition process was accompanied by an independent auditor’s report of the auction house’s financial statements for 2019 and 2018, firstly made public by Art Market Monitor. The latter provided a glimpse of the state of the internal finances at Sotheby's. Likewise, Drahi´s arrival marked a major shakeup among high-level staff and huge setbacks that increased with the unexpected arrival of COVID-19.

However, Sotheby's has taken a diverse set off financial measures to deal with these issues and, once again, made international headlines with their Marquee Evening Sale (June 29th), a spectacle in which Oliver Barker, lead auctioneer at Sotheby's, surrounded himself with screens and live-streamed receiving bids from colleagues in London, New York, Hong Kong, and online. As Benjamin Sutton mentioned in his article, the sale brought in a total of $363.2 million, with a 93.2% sell through rate. During this event, Sotheby’s marked its largest online sale with Jean-Michel Basquiat’s Untitled (Head, 1982) going for $13.1 million. Even if, as detailed by Charlie Wood from the Fine Art Group, the total sales were lower than last year and the event lacked the excitement and rhythm of a live auction, the overall event was quite positive. 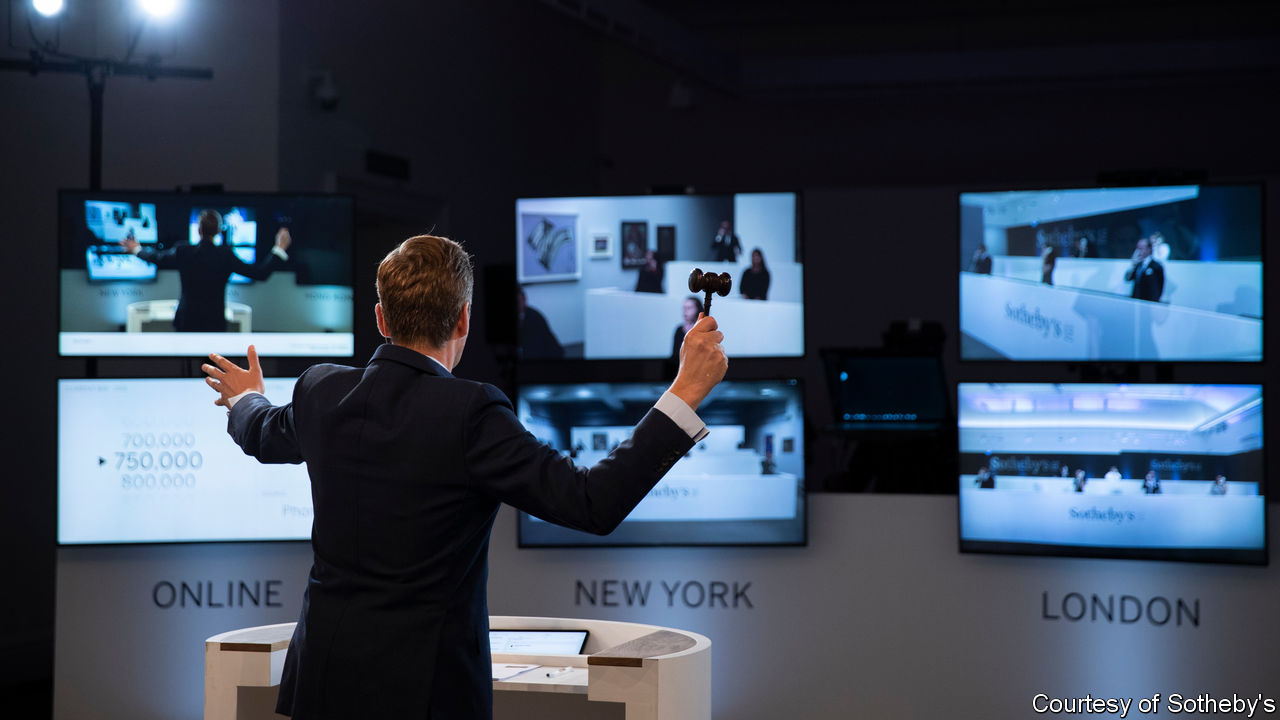 This sale will probably mark a new era for Sotheby´s and other powerhouse auction houses. For example, on July 10th, Christie's put together One: a Global Sale of the 20th Century, a live-streamed auction involving four consecutive city and time zone clustered auctions. This scenery further evidences how digital platforms have been instrumental during the health crisis and have proven efficient when selling art, especially well-established and famous artworks, such as the ones Sotheby´s usually handles. However, more modest channels of distribution do not have this kind of top-of-the-art international high-tech setup. Besides, some collectors need the full experience of an artwork before acquiring it. Adding on, the art auctioning world certainly misses the thrill, and almost theatrical display, of a traditional evening sale. With that being said, we will probably see both channels for the time being, the more limited physical one and the ever-present digital one. Stay tuned for other articles exploring the history of the most relevant auction houses worldwide.